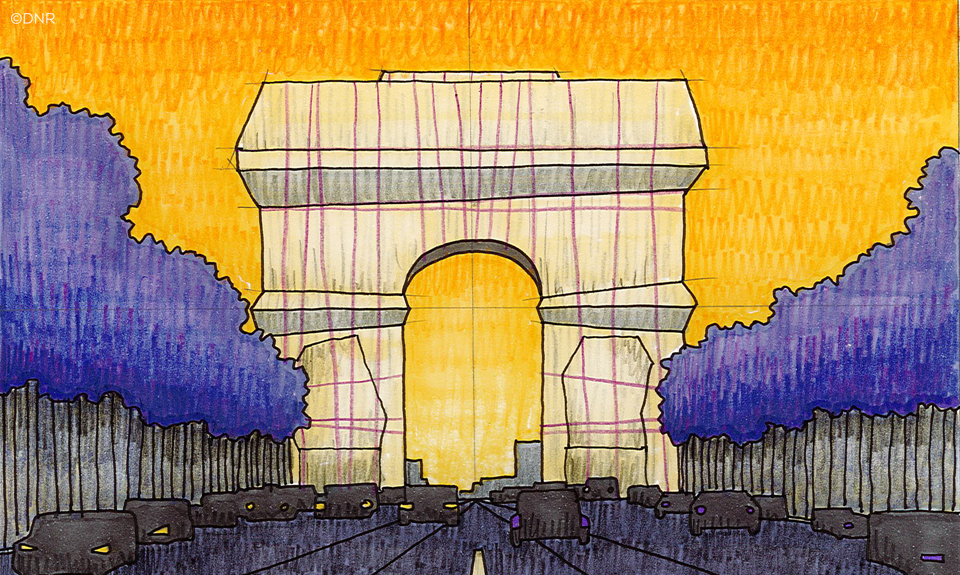 After 60 years of setbacks and negotiations, months of engineering studies and weeks of execution, Christo’s final posthumous work, L’Arc de Triomphe, Wrapped, is now on public display for two weeks. While its artistic value may be a matter for debate, its financing is exemplary since no public funding (from taxpayers and local government) was needed to create the temporary art installation. This unusual business model not only guaranteed Christo artistic freedom and longevity, it also helped them gain international recognition as millions of spectators will be able to “experience” their works publicly and free of charge. This is a completely disruptive entrepreneurial approach in a sector traditionally dependent on public procurement and galleries.

An art installation, an artistic duo, a brand: “Christo”

Now deceased, Christo and Jeanne-Claude – often simply referred to collectively as Christo – were a husband-and-wife duo who worked on artistic projects together from the outset. In the 1960s, Christo joined the New Realists movement and began wrapping objects, something that very quickly became the couple’s unique trademark and artistic signature. Their monumental installations, such as land art, never failed to attract tremendous attention (Valley Curtain (1972), Surrounded Islands (1983), The Pont Neuf Wrapped (1985), to name but a few) and have at times been more famous than the artists themselves.

The latest, ‘L’Arc de Triomphe, Wrapped’, began germinating in Christo’s mind in 1961. From that moment began the production of preparatory drawings, photo collages, sketches, diagrams, plans and scale models that became an integral part of the installation. These “peripheral” works are the main source of funding for all Christo projects, the duo’s hallmark, which makes them unique.

To guarantee their artistic freedom, the duo could not contemplate expressing their art via a model based on a traditional artist-gallery relationship.

While their early funding came from Jeanne-Claude’s family, the couple very quickly set themselves up as a small independent business. He was the creator, she the organiser – the unwavering support, the brains in charge of bringing the large-scale projects to fruition, living and breathing the product. The couple set up a company in the United States – the CVJ Corporation, where CVJ are the initials of Christo Vladimirov Javacheff – through which they could sell the various products and projects. No gallery, but a direct relationship with dealers, collectors and institutions. New local subsidiaries were created when the projects required it.

Today – and as was the case for the previous temporary large-scale projects – the 14 million euros needed to make L’Arc de Triomphe, Wrapped a reality are being entirely funded by the Estate of Christo Vladimiroff Javacheff. How? Thanks to the exhibition and sale, by Sotheby’s, of 25 works while the art installation is in place, and also through the sale of some of the artist’s earlier works (drawings, scale models, collages and lithographs).

Not a single cent is coming from public or private funding. There are no patrons or sponsors. While the majority of artworks presented in the public space are stigmatised for costing taxpayers too much, this is one criticism that cannot be levelled at this project.

Garnering visibility for the artwork locations

Regardless of the critics, from the very first large-scale projects, the visibility of the installations generated incredible media coverage for the artwork locations and attracted the general public. While it could be said that Central Park and New York were famous well before the The Gates installation in 2005, the artwork nevertheless provided a different perspective, new, easily identifiable pictures, and a proximity to the art world that was an added advantage for the project’s backer. This backer’s “only” contribution was the role played in obtaining permissions – a process that can be lengthy, complex, and sometimes unsuccessful. In the case of the Arc de Triomphe, it was Emmanuel Macron himself who approved the project in 2019, seeing it as a way to celebrate the Republic and France. The reflections on the monument’s wrappings are indeed subtly reminiscent of France’s blue, white and red flag.  Free, visible and symbolic art.

Were they entrepreneurs? Yes, because they shared the defining characteristics of entrepreneurs: a vision and the ability to make it real; defiance of the established order; the faith needed to attempt the seemingly impossible; tenacity and, above all, the need for freedom.

Were they like other entrepreneurs? No, because they were avant-garde artists. They completely revolutionised the uncommissioned public art market, recycled the materials used, and restored the sites on which they created their installations. Finally, they took a long-term approach by selling the intellectual property rights for products derived from the artwork to the Centre des Monuments Nationaux, a French government body that conserves, restores, and manages historic buildings and sites belonging to the French state.

“My projects are very literal, very real,” Christo explained to Cahiers de l’art shortly before his death. “Essentially, the work involves obtaining permissions, renting the land, and organising the logistics.”

And yet, this posthumous artwork that the artist was obsessed with for 60 years, masks – or unmasks – another more secret, more personal aim.

Insights Corporate political connections: how do they affect corporate transparency?

Sanctions, a geoeconomic weapon in the age of globalisation

Consilience or “the unity of knowledge”: an approach to complexity, a critical compass, a course of action