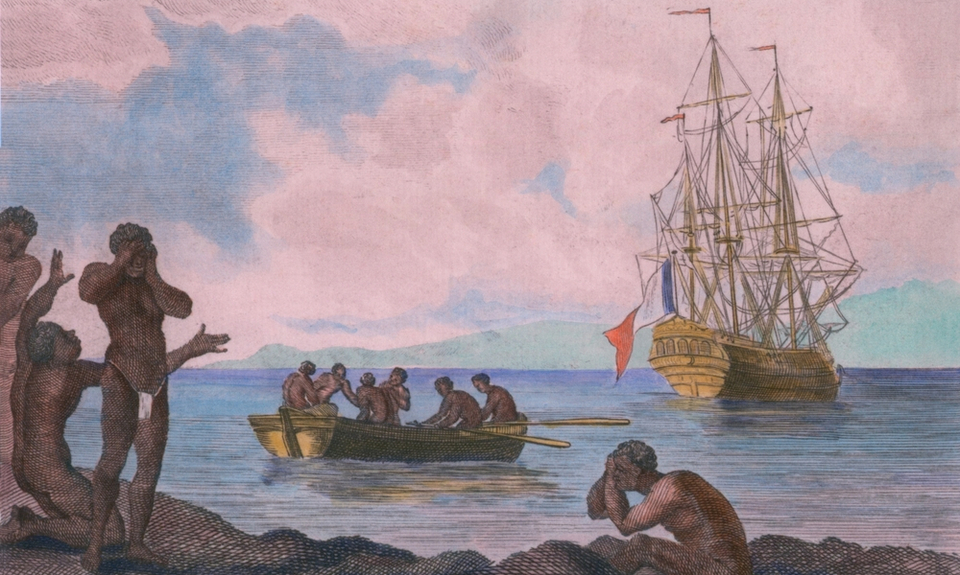 In the field of social psychology, cognitive dissonance is the tension experienced by an individual when their thought system, feelings or behaviour are conflicting. In its own way, slavery placed our societies in a state of cognitive dissonance: the proclamation of human rights coexisted with the reduction of people to the status of objects deprived of rights. To this day, this reality is often overlooked.

In a fictional narrative condemned by the political class, French magazine Valeurs Actuelles transposed Daniele Obono from present-day France to Chad in 1700 by depicting the Black legislator as enslaved by Africans. As justification for its story, the Valeurs Actuelles editorial team stated the need to reveal not only that Africans were already engaged in slavery well before they had any contact with Europeans, but also that they traded these slaves in North Africa, the Middle East and India, as well as the Americas. It is highly regrettable that Valeurs Actuelles failed to consider that it takes two parties to trade.

This “great revelation” by Valeurs Actuelles is not news to historians, who have long established that slavery was widespread in Africa before the arrival of Europeans. The map below, taken from Murdock’s Ethnographic Atlas, shows the many African societies that engaged in it (coloured dots on the map), while the “indigenous slavery” indicator provides an indication of its prevalence within the current boundaries of Africa. It is worth noting that its intensity and socio-economic importance varied tremendously from one society to another.

As demonstrated by the data compiled by the economist Nathan Nunn, in West Africa there is a strong correlation between the practice of local slavery and its trade outside of Africa. It is therefore possible that African slavery generated the conditions necessary for the different slave trades ─ African, Eastern and Western. In other words, slavery existed in Africa before the transatlantic trade and African merchants deliberately and actively participated in the slave trade.

Nevertheless, for a market to be functional it requires not only a supply but also a demand. Statistics on the number of people transported during the trade between Africa and America show that slave exports reached their peak in the 18th century during the Enlightenment period, even though much focus was placed on the ideals of freedom and equality at that time. The European nations where these ideas were the most developed, such as the United Kingdom and France, were among those that participated most in the trade of Africans.

This chasm between the proclamation of universal values – whereby all individuals are equal – and the practice of slave trading – whereby individuals are deprived of their humanity – is all the more incomprehensible given that certain European countries legally recognised the “free soil principle”.  In virtue of this principle, no person could be a slave within their borders, but these same countries reserved the right to trade individuals who had been enslaved in other parts of the world. How did Europeans justify such a dichotomy? The historians David Davis and George Fredrickson suggest two broad explanations: culture and pseudoscience.

The cultural reasons date back to antiquity. Indeed, the first historical justification for slavery can be traced back to the Greek philosopher Aristotle. He considered that humanity was naturally divided into two groups: masters, characterised by autonomy, and slaves who are dependent on “the superior”. This Aristotelean blessing enabled numerous theologians and jurists from the Christian West to rationalise the incoherence between the religious tenet that all are equal in the eyes of God and the inequality that is inherent in the condition of slavery. The biblical story of the curse of Ham was gradually used to justify the reduction of Africans to slavery, as their black skin was interpreted as being the mark of the divine curse. In addition, in Christian iconography the growing association of the colour black with negative values may also have contributed to spreading the idea that people of colour were inferior. Finally, the civilisational argument – which would appear again several centuries later during colonisation – was brandished by merchants, notably, who insisted that the transatlantic trade was a civilising mission offering slaves physical and spiritual salvation. During that same period, in the Muslim world, the use of slaves was also traditional. They were assigned the most degrading tasks, which then justified the inferiority of their status.

As for the pseudoscientific arguments, in the West in the 18th century they took the form of an anthropology aimed at classifying individuals into different races, even at times promoting the existence of multiple ancestors (polygenesis) instead of Adam and Eve. Advocates of this theory considered white Europeans as the superior race, while Africans were deemed to be people with greatly inferior intellectual capabilities. Some great thinkers shared these racist views even though they were also known to condemn slavery . Voltaire is one example. In Candide, Voltaire was outraged by the fate that awaited enslaved Africans deported to America, while at the same time insisting that they were an inferior variety of people:

“Only a blind man can doubt that Whites, Negros, Albinos, Hottentots, Samis, Chinese, and Americans, are entirely different races (…). [Regarding black Africans] The round eyes, their wide nose, their inevitably broad lips, their differently figured ears, the wool on their head, even the measure of their intelligence, put prodigious distances between them and the other species of man.” Voltaire, An Essay on Universal History, the Manners and Spirit of Nations.

Cultural and pseudoscientific arguments played a crucial role in the acceptance of the transatlantic trade by modern societies. More prosaically, as underlined by the geneticist Adam Rutherford, any argument in favour of slavery was allowed as long as it legitimised the slave trade.

While the transatlantic trade profited European societies, it also deeply and violently transformed African societies. By significantly increasing the supply and use of slaves, even after its abolition, the exportation of human beings transformed “societies with slaves” into “slave societies”. In his state-of-the-art review, Nathan Nunn identifies the negative effects of Africa’s slave trades on demographics, interpersonal trust, conflicts and the role of women. Generally speaking (graph on the left), the economic underdevelopment of modern-day Africa can be attributed in large part to the slave trade that occurred centuries earlier.

Valeurs Actuelles magazine justified its narrative fiction by its wish to illustrate the complexity of history. Our article underscores that the transatlantic slave trade was indeed a dramatic and complex period during which the histories and cultures of very different societies clashed. But it also highlights the fact that the heritage on which we like to base our current values, whether it be Greco-Roman, Christian or the Age of Enlightenment, should not always be a source of pride. Intellectual honesty dictates that every aspect of a question be considered. That is where the true complexity resides. As the sociologist Daniel Moynihan once said: “Everyone is entitled to his own opinion, but not to his own facts.” By focusing on the slave trade practised by Africans, Valeurs Actuelles ultimately obscures more than it reveals.