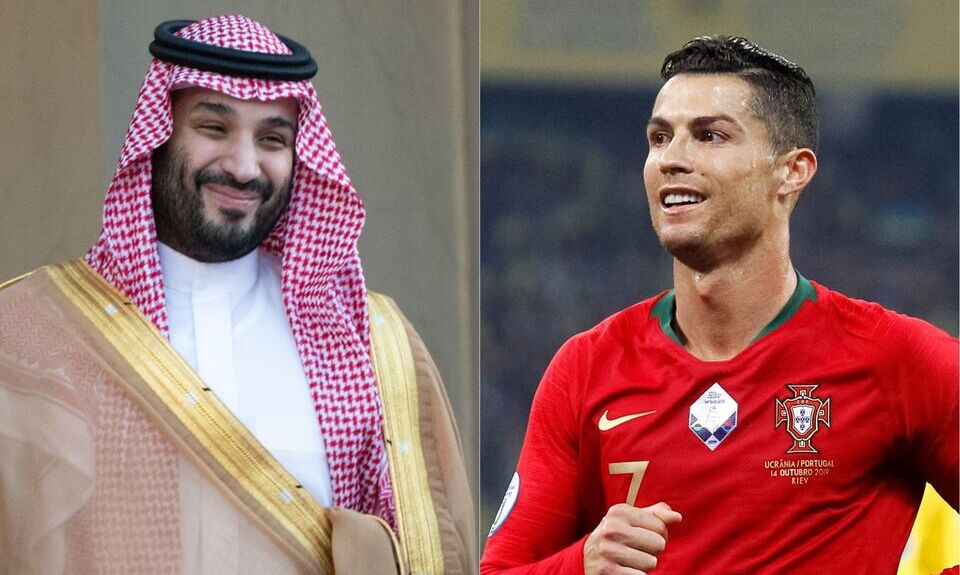 Cristiano Ronaldo’s move to Saudi Arabian club Al Nass is much more than sporting news. It reveals a great deal about Saudi Arabia’s ambitions, particularly its desire to establish a position as an AfroEurasian hub.

It is an interesting coincidence, albeit a very unfortunate one, that in the same week Cristiano Ronaldo signed for Saudi Arabian club Al Nassr, Brazilian football legend Pele died.

The two of them have shared a moniker of being ‘the best player in the world’ but will also now have spent their later years as players in smaller, dare one say unfashionable leagues.

In 1975, Pele signed for New York Cosmos in the United States, back then a country that wasn’t commonly perceived as a football nation. Indeed, observers speculated that he had signed for the Cosmos as one last pay-day before fully retiring from playing.

Ronaldo is not Pele

Some have framed Ronaldo’s switch to Al Nassr in the same way – the Portuguese is now in his late thirties and can’t be too far from finally hanging-up his boots. But to equate his move to the Gulf kingdom with Pele’s American adventure is misplaced, there is more to it than might appear.

After all, here is a country now vigorously pursuing policies that have already seen it invest hundreds of millions of dollars in football. The reason for this is that Saudi Arabia is in the midst of transformation, a process in which football plays an important role.

This transformation is a response to years of economic, socio-cultural, and political malaise, and by pressures now confronting Saudi Arabia. Whilst the country has huge wealth derived from oil and gas, its economy is overdependent upon them and needs to be diversified.

Socio-culturally, the country has a youthful population (almost 70% of people are aged under thirty-five) which is hungry for change and wants to live life in a different way. Mindful of the potential for dissatisfaction or unrest amongst Millennials and GenZ-ers, the kingdom is currently opening-up in ways not seen before.

The implicitly political nature of this isn’t the only challenge in this sphere facing Saudi Arabia. Regionally, it has seen smaller near neighbours such as Qatar grow in power, prominence, and stature, which government in Riyadh wants to replicate if not considerably surpass. Internationally and globally, the country’s global image and reputation require remedial action, if not more assertive promotion.

Domestically there are issues as well; for instance, given the state’s omnipotence, many Saudi Arabian organisations are dependent upon its financial generosity. Bailouts are common, whilst ‘big state’ presence has stifled innovation and commercial performance.

Nowhere is this more evident than in football, where even within the last year clubs have had their financial debts written-off by the state. Nevertheless, Saudi authorities have been keen to address such problems for a while and there’s a desire to promote clubs’ financial self-sufficiency, notably by building revenues and better controlling costs.

In one sense, Ronaldo’s transfer would appear to undermine such ambitions, his $200 million+ annual salary perhaps more evident of excess and largesse than prudence and efficiency. However, one interpretation of his transfer to Al Nassr is that it will boost commercial revenues, drawing-in new sponsors (ideally from overseas), boosting television contracts and merchandising sales, whilst engaging new generations of fans and attracting other players of his stature to the country.

In tandem with this, Saudi Arabia football sees itself as at least being on a par with its Gulf on-field rivals. This includes Iran, which can lay claim to being the region’s football powerhouse, a label the government in Riyadh would gladly take away for from its adversary to the east.

Ronaldo though will be expected to deliver more than this, regularly winning the Asian Champions League is on the agenda for the kingdom’s football leaders. Among some, there are even grander ambitions for Saudi Arabia’s leading clubs to appear in club global rankings of brand, marketing, and financial value.

Clearly, a player alone cannot lead the country to success be it on or off-the-field, but he is part of a plan that will inevitably result in him ascending to a role that will see the Portuguese positioned as something much more than a footballer.

Saudi Arabia is already embarked upon a massive programme of infrastructural developments costing billions of dollars, which Ronaldo will be involved in promoting. We should expect his name, image, and other brand assets soon to be associated with projects such as Neom and Qiddiya.

It is at this intersection that we are right to foresee Ronaldo serving a geopolitical purpose for Saudi Arabia. Preceding his move to the Gulf, rumours had begun to circulate that the country will bid to host the 2030 FIFA men’s World Cup. Many are therefore already speculating that he will become an ambassador for any such bid.

There is some consensus about a bid being jointly made with Egypt and Greece, which are from the African and European football confederations (Saudi Arabia is a member of the Asian confederation). This is consistent with Saudi Arabia’s deliberately intended position as an AfroEurasian hub. Ronaldo’s global stardom would provide some glue to help in holding this proposition together.

How successfully Riyadh and Ronaldo might be in doing this will depend upon the former globally improving its image and reputation, which have been degraded for numerous reasons over the last twenty years. The latter’s contribution to achieving this will come in terms of the legitimacy his presence confers upon Saudi Arabia, but also in the way that he helps re-brand the nation and imbue it with a set of values that engages people around the world.

In this regard, critics are already claiming that ‘Ronaldo to Al Nassr’ is nothing more than an exercise in sportswashing. Cynics alternatively argue that we have seen this before, most recently in China, where a lot of money was but delivered few benefits, and which quickly helped to precipitate the bursting of an investment and geopolitically inflated football bubble.

With the 2030 World Cup announcement due in 2024, and with Saudi Arabia moving towards its 2030 National Vision, it will be a year or more before an initial assessment can be made of the Ronaldo transfer. Yet in policy and strategy terms, key stakeholders should be under no illusion about Saudi Arabia’s intended trajectory or the outcomes of this, this includes Cristiano Ronaldo.

Insights World Cup 2022: who won the prize for ‘soft power’?

Digital money, private and public: is this the face of the future?